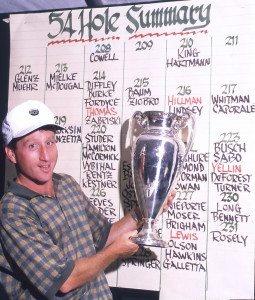 Charlie Cowell achieved Division III All American honors while attending Montclair State University.  He broke on to the professional golf scene in late 1985 cashing paychecks in each of his first 17 events.

He was often paired with the likes of Lee Janzen, Kenny Perry, Marco Dawson, and Michael Allen to name a few. Unfortunately, tour qualifying became his biggest nemesis missing out on advancing to the final stage twice by a single stroke.

Undiscouraged, Charlie continued to play and win more while working as an assistant pro for a number of very prestigious golf clubs in New Jersey.  In 1992, he was honored with the New Jersey Professional Golfer’s Association Player of the Year Award.  This coming after a career year with major title wins in the New Jersey State Open and the New Jersey PGA Assistants Championship.

In 1994 he added another major title as he garnered a decisive win at the famed Metropolitan Open Championship played at the storied Ridgewood Country Club.  After winning the Met Open Charlie began concentrating his efforts towards teaching others the game of golf.  His use of body improvement, mind, hypnosis and visualization have set him apart from his peers and he continues to lead by example.

Most recently Charlie has begun using TrackMan Pro, the world renowned golf swing analysis device used by golf’s best players and coaches.  His success, competitiveness, and devotion to teaching the game of golf continue to make him a very sought after golf instructor.